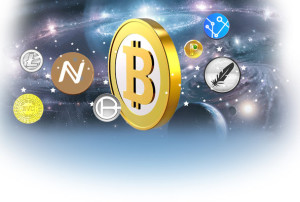 By now, you may have heard of a thing called Bitcoin, the most prominent alternative currency in the world. There’s also Bitcoin’s little brother called LiteCoin, the fun meme-based DogeCoin (wow! To the moon!), NameCoin and several others.

If you’re not familiar, Bitcoin is a peer-to-peer currency and more technically, a cryptocurrency. Cryptocurrencies function as digital “cash”. Transfers literally go directly from one person to another, anywhere in the world, without ever touching a bank or going through a centralized company.

It exists in it’s own ecosystem outside of the central banking systems around the world, nor does a single company control it, so it’s different from your typical Paypal-type payment processors and a lot of the other digital currency systems that have been tried in the past.

This is all part of a big movement creeping up in the tech world, moving toward developing similar systems to Bitcoin that allow people to trade and exchange value directly with each other and cut out the middleman (banks).

It may not be obvious yet but systems like this are the future of money we’re all heading toward in our opinion. We expect peer-to-peer currency and trading systems to grow by leaps and bounds and for banks to become increasingly unnecessary. The means to do so exists, developers just have to continue building them (which they are) and it will become reality.

One of the problems of centralized banking, that’s been highlighted recently, is the control factor of centralized banking. For example, if the current government and banking establishment see anything as a threat to it’s power (i.e. – Wikileaks), money has become the primary choke point that can be used. Right now, when it comes to money we are all at the mercy of the banks when it really comes down to it.

Where banks and governments have failed the public, the technological means is now allowing for the evolution of money to take on a different form. More specifically, for the public to take back control of money in a more efficient way than ever before.