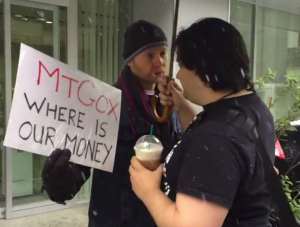 Mt. Gox, once king of the hill of bitcoin exchanges, is completely shut down and has declared bankruptcy.

Due to ongoing technical, legal, and ultimately piss-poor management issues, especially over the course of 2013-2014, the Tokyo-based exchange created a horrible situation for themselves and the traders who held funds and coins there.

Gox’s problems proliferated for so long it gave rise to a new catchphrase:

Here’s a very brief rundown on what happened recently that sent Gox into a death spiral:

This is a rather technical issue (you can read more here and here), but basically there’s a way for bitcoin transaction ID’s to be spoofed by duplication, which can allow some people screw with the network and possibly get away with theft.

Some exchanges had vulnerable methods of validating transactions surrounding this issue, but most of them handled it properly and more recently, even more additional steps have been implemented across the community to ensure proper transaction validation.

In early Feb. 2014, a DOS attack related to malleability caused a wave of concerns as it temporarily screwed with the entire bitcoin network. Many exchanges, wallet services, and core Bitcoin devs quickly moved to curb possible issues surrounding the DOS attack. They also temporarily halted some aspects of their service while the DOS attack was being addressed.

How exactly this event actually affected MtGox remains unclear, but it may have compounded other serious internal problems, or they may have just blamed the event to cover up other issues. It’s hard to say at this point, but they continued to freeze and delay withdrawals, and remained quiet on any resolution or resumption of services.

Trading within the MtGox exchange itself continued for a while and became it’s own ecosystem since getting funds or coins on or off the exchange was next to impossible. This caused the MtGox Bitcoin price to trade at a far lower price than other exchanges.

3. Poor communication and stalling from MtGox

A huge problem with MtGox all along has been lack of good communication. Mark Karpeles, CEO of MtGox, was horrible about this, and always has been.

Inquirers were continually been met with an attitude of “don’t bother us, we’re working on it”. No one knew if they actually were or not.

Karpeles also took to blaming Bitcoin itself. As we understand it, although the malleability issue can and will being addressed at the bitcoin-core level, it takes time, and is a non-issue with proper implemtation by exchanges. The network itself is sound. Exchanges are solid as well if the recommended transaction implementations are followed.

In MtGox’s case, the combination of MtGox’s highly customized wallet, failures around transaction malleability protection, and other poor planning software engineering issues may have been responsible for finally pushing them into a corner.

After being confronted by investors/traders actually flying to Japan to ask where their money is, MtGox subsequently moved offices to an address that was reportedly just a virtual office.

Then more silence and stalling…

Between Feb. 23-25, 2014, Mark Karpeles stepped down from the Bitcoin Foundation. Subsequently, Mt. Gox shut down after a leak of an alleged internal Mt. Gox document.

The leaked document details over 700K Bitcoins being lost over a long period of time, plans to bury it in the books and try to make up the loss over time, and re-branding as “Gox” with new management/ownership to give them a fresh public image. Basically, hide it and lie to everyone.

It seems ultimately many ongoing hidden issues finally caught up with them.

There are now reports of a US government subpoena and an investigation by Japanese authorities.

On February 28, 2014, MtGox announced they will seek bankruptcy protection.

For some additional perspective on what happened with MtGox vs. reassurance about the Bitcoin network as a whole, here’s an excellent interview with Andreas Antonopoulis of Blockchain.info. It’s long, but worth watching, at least the first 30 minutes.